What is an allergy ?

According to the Larousse dictionary : (female name derived from the Greek "allos", another, and "ergon", action).
“Abnormal reaction and specific to the body in contact with a foreign substance (allergen) causing no disorder in most subjects” 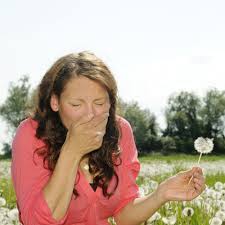 According to the World Health Organization : Allergies are considered to be the fourth disease in the world after cancer, cardiovascular diseases, and AIDS.

Allergies spare no age group, and can be triggered very late in life for some patients.
Changes in the environment (pollens, physico-chemical pollution), in our homes (increase of buildings being built closer together in confined area which leads to an increase in the allergenic burden caused by mites, animal allergens, mold) and increase of the inside heating temperature, the increase in the number of pets, the more frequent use of cars, a very different food supply from that of 30 years ago including many chemical additives, the evolution of medicine and too frequent use of antibiotics, all seem to be largely responsible for the allergies explosion.

Thus, according to the Ministry of Health, 20 to 25% of the French population suffers from an allergic disease. Respiratory diseases are at the forefront of chronic childhood diseases. The prevalence of asthma has increased: 15 years ago, it was 2 to 3%, against 5-7% currently. French dermatologists estimate that nearly 15% of children and 4,2 % of adults seen in consultation are allergic.

According to the Vulgaris Medical Encyclopedia : "An allergy is an abnormal reaction (pathological) and specific to the human body in contact with a foreign substance (allergen) that does not happen with a non-allergic person.

Allergy is a repetitive phenomenon in which the same process occurs with, as the only difference, that the immune system will produce antibodies and lymphocytes sensitized against substances that are normally harmless.
Indeed, the allergens identified in this way by the body are considered as dangerous, while, in reality, they are not.

Generality : a normally harmless antigen, such as pollen for example, may be considered by error as dangerous by the body which, when in contact with the allergen, causes a general reaction called hypersensitivity, the result of an immune reaction.

The role of the immune system is to recognize a foreign body called an antigen. It is most often found on the surface of micro-organisms, in the form of proteins, among others. The presence of this antigen leads to the body producing antibodies, also called immunoglobulin and white blood cells; in particular the lymphocytes have become sensitive, more precisely sensitized. These white blood cells will come into contact with these antigens which will allow it to destroy the micro-organisms along with the antigens they were carrying.

According to BBA : Allergies, like intolerances, are an incorrect answer by the human body (either a physical, a physiological, an energy or a psychological reaction) for a particular person against one or more substances. Yet, for the majority of people, these same substances are harmless or well tolerated, or even useful to their health: it is therefore an internal malfunction in the allergic or intolerant person, that has created this inappropriate reaction and which must be remedied.

Indeed, in an allergic or intolerant person, for many reasons related to multiple factors, their brain has perceived and recorded this substance as a threat to their organism which then mobilizes the immune system against this "invasion" and goes on a disorderly hunt for the inappropriate intruder. The BBA treatment then corrects the brain’s misperception and treats the energy imbalances, the cause of the pathology.

For the BBA allergies energy treatment method, stress, psychological and emotional traumas and various other aggressions that we have lived are at the source of an "internal communication error", a bit like a 'bug', that equally disrupts our metabolism, and are also the source of allergies and intolerances.

While adhering to the World Health Organizations conclusions, we also observe that increasing stress, acceleration in life rhythms, modern habitat materials, and especially, the extraordinary proliferation of various airwaves, all participate in weakening the body, turning it into a stress. These are all very important factors in the development of allergies and intolerances.
Example of a "bug" leading to the formation of an allergy: A person receives traumatic news by phone while eating an egg on a table covered with a cotton tablecloth on which there is a bouquet of tulips.

The news received on the telephone is perceived by the body as a stress. Normally, the body stores this stress to enable it to fight more effectively if a similar stress were to occur again.
Under certain conditions (personal factors of stress management, insufficient immunity, tiredness, etc.), a bug can then occur: the body will not only save the stress, but, also, some elements with which the person is in contact with at that moment, and equate them with that stress: phone, egg, cotton, tulips... in this case.

Subsequently, and every time the person will be in contact with one of these elements, the body will fight until exhaustion. This is where those symptoms begin to appear, with or without blood markers.

Finally, when the body is in an allergy or intolerance state, the body perceives it once more as an aggression or stress, and can again memorize other substances as in the first case.
This explains the exponential nature of allergies or intolerances: most often, people start by having isolated reactions, and then, over the years, the number of reactions is more and more severe.
Explanations on the allergies energetic treatment